The Key To Jealousy

My top 10 inspirational quotes. (May 2019)   By Alice Landry     Some days you just have to detach, rise above, be an observer, and allow events to unfold naturally. ***** Do not be afraid of the unknown. If something wants to leave your life, then let...
Read More

A Woman of Substance.

A Woman of Substance. By Vanessa Louise Moore   Have you ever been so moved by a book that you make different life choices? I read my first book when I was 23 and it shifted how I perceived myself and my life.   ‘A Woman of Substance’ by Barbara Taylor Bradford...
Read More

Be willing to look at the inner parts that don’t want you to be happy so you can be fulfilled.

Be willing to look at the inner parts that don't want you to be happy so you can be fulfilled. By Joanna Intara   I was sitting outside in my red and yellow striped Italian hammock this weekend feeling pretty fancy and free. The emerging warm Spring breeze...
Read More

I’m going to tell you a tale and I have to warn you it gets worse before it gets better. Like how Snow White is toast and in the glass box until the prince appears. So bear with me.

Once upon a time, there was a girl (who was pushing 30), on her morning commute. Her noble steed was actually a car, that also serves as a dustbin and karaoke bar on wheels. It is where all McDonald’s drive-thru wrappers are laid to rest and where she holds regular concerts for 1. That girl, not yet a woman, is me.

It was a grey morning; the month doesn’t matter much because, in England, grey is a colour for all seasons. I heard “The River of Dreams” on the radio in my car; I had heard it many times before but had compartmentalised it in my mental discography along with “Hakuna Matata” and “The Lion Sleeps Tonight”. I didn’t know the lyrics and at that point, it was still in that section of the library. Later that day a friend recommended it as a song I should try to cover. I thought this an odd coincidence, but at the time I had little understanding of synchronicities and universal signs. So I went home and started to lyrically listen to the song that was going to change my life forever.

Rewind to a few months earlier. For quite some time I had known my marriage was in trouble. I had tried to suggest marriage counselling but that always fell flat on its behind. When I entered my marriage I felt confident and used to express myself through various mediums. But quite quickly, whoever I was got quashed and she took a big yellow taxi to anywhere I wasn’t. She wasn’t gone forever, but she changed her number and blocked me on Instagram so I couldn’t find her. I had been compromising on being myself for years and more than anything, I just wanted to be loved. This is the part where you say “awwww”.

I listened to the song, slowly the lyrics washed over me. That was the turning point when I hired Billy Joel to coach me through my divorce. Billy isn’t aware of this, so I hope he won’t send me an invoice for the number of hours he put in because I’m sure he’s not cheap.

I went straight into a deep depression. Sorry, Billy and everyone reading this. For two weeks from 7 am to 11 pm, he was in my ear, giving me grief and pushing me to do something about the inevitable. I would walk to the school gates but in my mind, I was walking with Billy down to the river and he would say “it’s too hard to cross”. I would reply “you’re damn right its too hard Billy, why are you showing me this?”. How was I ever going to make a stand for what I deserved? It felt utterly impossible and hopeless. And there was the incessant question of what was I looking for?? I wasn’t sure what that was either but I knew something more existed and I needed to find it.

Billy told me that he’d lost a part of himself and it wasn’t intentional, he’d lost “Something somebody stole”. I felt so angry that I’d allowed my light to be extinguished and I was living somebody else’s dream. I felt like an empty shell and I was tired of not being myself. It felt like my solution and destination were both in thick fog and I didn’t know where to start.

One day, I decided to Google “how to leave your husband”. It’s like that song “50 ways to leave a lover” by Paul Simon. Except when you’re a mum and you have equity in a house, you can’t just hop on the bus Gus and drop off the key Lee. You have to get yourself together and have a plan, Stan. Google has all the answers, it knows when you have a fungal infection and it knows ways to leave husbands.

I found a forum where a lady had written her husband a letter. I thought this would suit me down to the ground because I hate confrontation, usually chicken out, or the words come out wrong. I thought a letter would give me a chance to explain how I truly feel and when I’d given it to him I could hide behind the sofa like a kid during a horror movie.

At the end of the forum post, the lady had signed off. Her name was “Esther” too. I knew it was another sign so I followed her advice. I wrote my letter and carried it around in my handbag, like a piece of forgotten homework, all the while listening to Billy and trying to find my courage. I was hoping the Wizard of Oz might show up and bestow some on me but he never came. You have to be your own heroine sometimes if you want to live happily ever after.

Fast forward and today, the girl (in her 30s), lives in the house of her dreams with her daughter and her dog. She has the relationship she longed for, and a career that sets her on fire helping others manifest their desires too. You create your own reality. I have been asked several times where I found the courage to give over my letter and what was the turning point. Being brave doesn’t look like slaying the dragon, or pushing the witch off a cliff; being brave is choosing to love yourself.  You are allowed to feel scared and uncertain, as long as you know that you always deserve to be unapologetically you. Choose a journey of authenticity; you are responsible for your happiness, your time is now to create that life of fulfilment. Only settle for the dream that lights you up.

Thank you to Billy Joel for mirroring my journey through your words and for coaching me to cross my river.

“We’re all carried along by the River of Dreams”. Billy Joel

Let your vibe attract your tribe. Share some love... 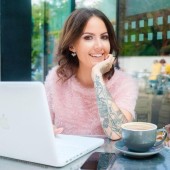 Be willing to look at the inner parts that don’t want you to be happy so you can be fulfilled. May 21, 2019

Get the latest news

Don't miss out! Get the latest news from our site delivered right to your inbox.

We use cookies to ensure that we give you the best experience on our website. If you continue to use this site we will assume that you are happy with it.OkPrivacy policy